Augmented reality is revolutionizing the areas of medicine and surgery, especially for its innovative and supportive role in operating rooms.

In recent times, there has been a lot of talk about the possibilities of artificial intelligence and the most cutting-edge technological innovations applied to the healthcare environment. One of the elements called to play a key role is Augmented Reality (AR), which has already meant a stark change in terms of possibilities, safety and efficacy in operating rooms. 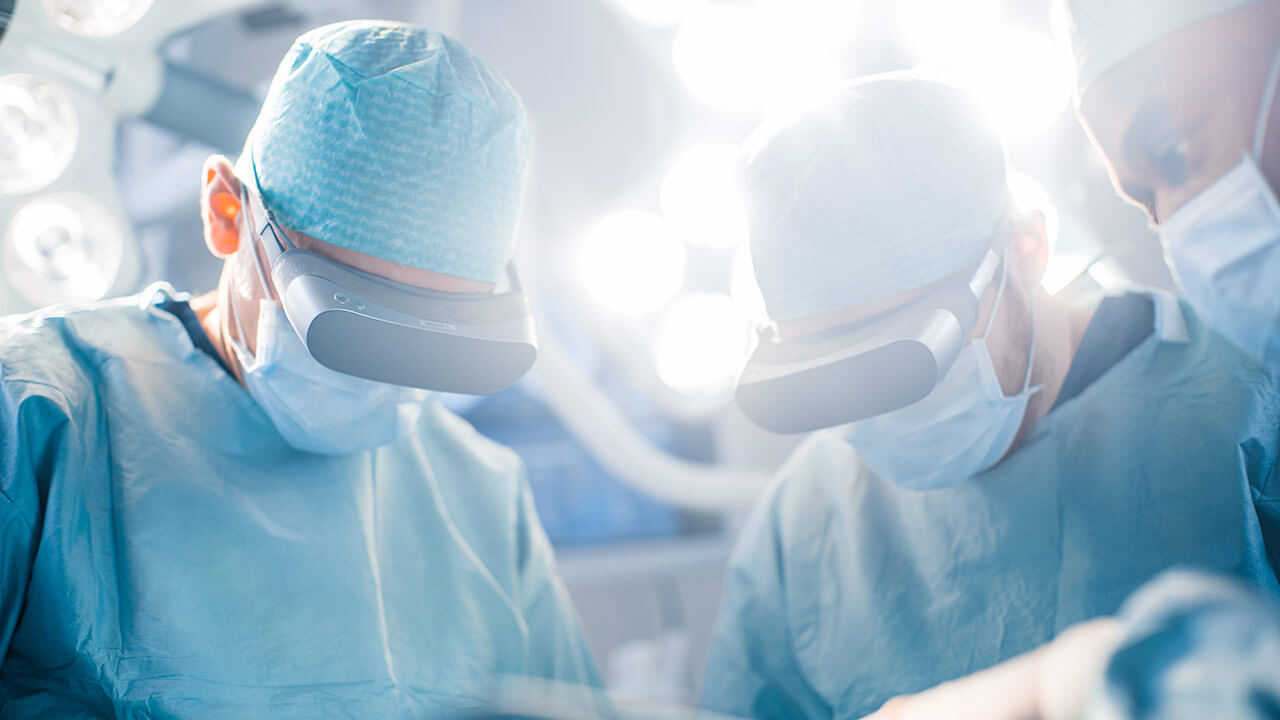 Augmented reality spread around the world thanks to the emergence of the game Pokemon Go. These video games were reinvented in order, through a smartphone app, to be able to find the most popular pokemons of the saga in any area of ​​any city.

These “captures” of the Japanese creatures were achieved through augmented reality on the mobile screen. What is augmented reality then? This element consists of adding additional information to a device, from a smartphone to glasses, which is capturing reality through its camera.

The user, through the viewer of his device, sees what is around him, and what augmented reality does is provide him with more valuable information about what he is seeing, even being able to interact.

“Augmented reality offers images superimposed on the real environment, and what is observed is a mix between real and virtual elements.”

If we extrapolate this technology to the healthcare field, the combination of images from the real world with virtual ones – provided by a technological device – to create a mixed reality in real time is something that will be a before and after in hospitals. Healthcare, so given to innovation, is not lagging behind in the implementation of a technology that, applied to the operating room, can be of great help.

The potential of glasses and augmented reality in operating rooms

The future is already here when it comes to augmented reality glasses as one more surgical tool.

We already know that every surgical operation is something like a “choreography”, in which a whole medical team, with the surgeon at the head, must be synchronized. Well, what new health technologies are achieving is that the surgeon himself, anesthetists, nurses and other assistants, have much easier to make life or death decisions during an operation.

Augmented reality glasses are what are making it possible. These glasses, in the operating room, can include the vision of organs in 3D up to all the vital signs of the patient.

The possibilities are almost unlimited. For example, there are platforms that allow the surgeon to control, through manual gestures or voice commands, the information that appears on his glasses. As if they were different camera shots on a movie in real time, the virtual screen offers 3D models by means of CT of the intervened organ, the vision of the vital signs and even viewing angles of other members of the team, as well as other sources of information (ultrasound images, rays, etc.).

One of the fields in which the most progress has been made is macular degeneration, since augmented reality gives access to CT images and other formats, facilitating ocular operations that are usually delicate.

But we can even go further: with AR, telecare takes on a new meaning. Other surgeons can virtually attend the operation and advise the main surgeon on the decisions to be made in each situation/moment. And where human vision does not reach, technology will arrive: through artificial intelligence and machine learning, real-time analysis of critical points will be offered, indicating, for example, possible trajectories for the realization of implants.

Within the evolution of AR technology applied to operating rooms, the visualization of two-dimensional and three-dimensional models of organs during surgical intervention stands out as the latest in image-guided therapy. Surgeons and the healthcare team can visualize, thanks to semi-transparent and color images superimposed on the real world, graphics, numbers and texts with information about the patient and his condition during the intervention.

Changes in training models after the pandemic

The Covid-19 pandemic has forced us to rethink the practical training of medical students in operating rooms as we knew it.

Currently, many teaching surgeons, thanks to special glasses with a built-in camera, broadcast the class live from their subjective view during an operation. And in turn, they can add teaching material superimposed on the screen. This, incidentally, improves sanitation and hygiene in the operating rooms, since the surgeon-teacher does not touch any material to teach the images and therefore maintains the sterility of the hands.

Pioneering methods together with 3D

In Spain, the Gregorio Marañón Hospital in Madrid was a pioneer in developing an operating room system that combines the use of augmented reality glasses and 3D printing.

This system projects holograms of their medical and radiological tests (CT, MRI, PET, etc.) onto the patient. A health advance that is allowing to improve the results of the interventions, minimizing the risks and shortening the times of the operation.

“Thanks to this tool, healthcare professionals obtain more and better information during surgery.”

By 3D printing a personalized template that includes an optical marker, the virtual reality glasses are told where to project the previously generated 3D holograms, achieving “equipping the surgeon with X-rays” during the intervention. 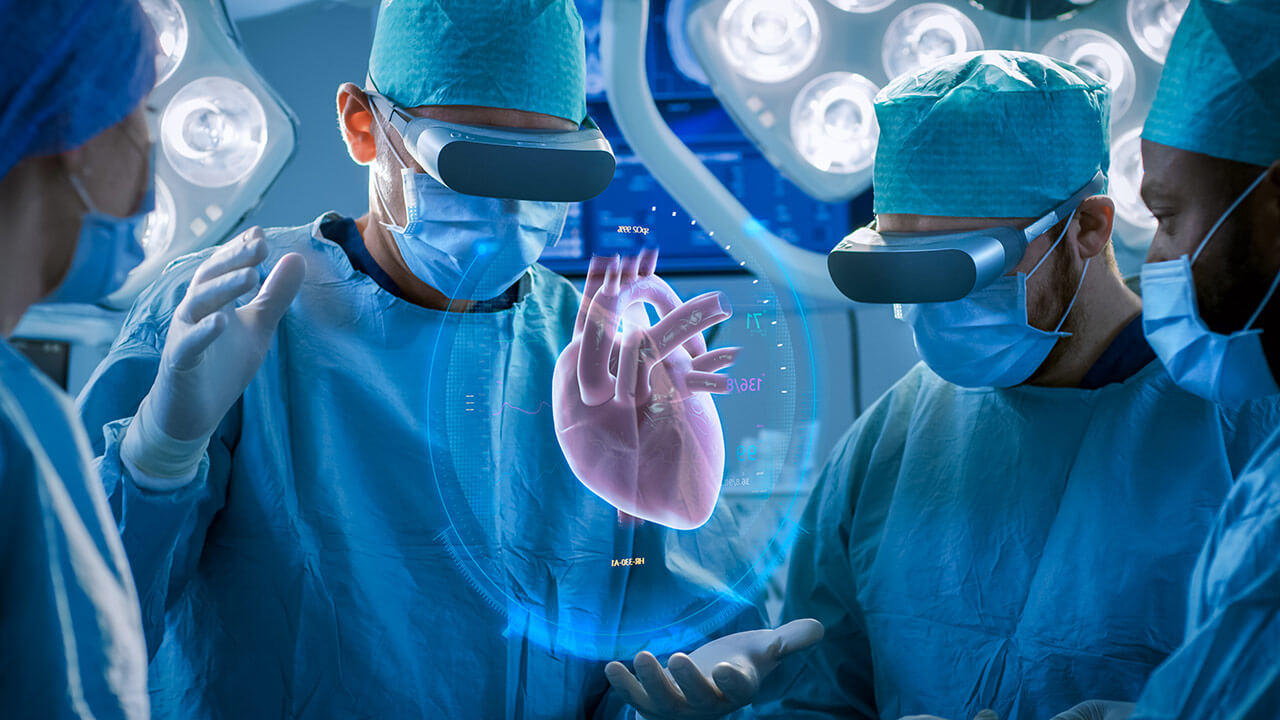 Augmented reality has entered the operating rooms to stay and remain. The fact that surgeons can see relevant information in their glasses while they are operating is a before and after in healthcare technology.

“The purpose of RA is for the surgeon to have within his reach, during the operation, the visualization of key elements such as tumors, especially sensitive vessels or the like, in order to increase the efficiency of the surgery avoiding damage, repetitions or unnecessary searches.”